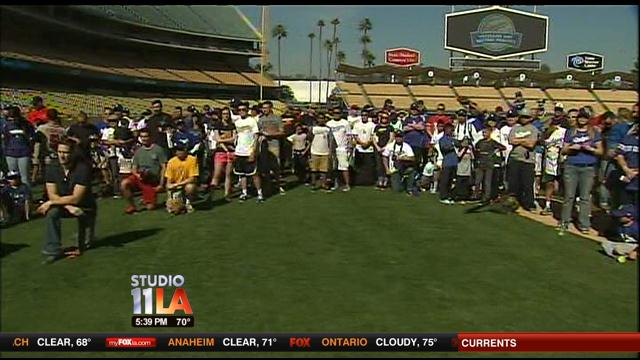 I CAN ROOT FOR THE DODGERS ON THIS ONE!

For some reason, I’m usually rooting for whoever is playing the Dodgers, but I can root for the Dodgers on this one.  Thank you Dodgers for honoring a group that deserves it.  Expressing thanks takes some effort and Veterans deserve that effort and more.

“It’s fun to see big tough grown up guys (and gals) running around like they’re little kids, and that’s just what happened today (Veterans Day) at Dodger Stadium under a gorgeous blue sky.

For the third time the Dodgers invited Vets, their family and guests to enjoy the Stadium. That meant photos, T-shirts, tossing the ball around, running the bases, and even batting practice. (Not to mention complimentary Dodger Dogs for all). For those who grew up in So Cal, this was literally a dream come true. It was a great idea. No there weren’t any Dodgers players there, but there were some great old timers, Sweet Lou Johnson, Al ” The Bull”” Ferrara, and a certain former Army man, (1945 to 1947) you may have heard of named Tommy Lasorda. He said ” I wore the uniform of the United States Army with pride and dignity and I wore the uniform of the Los Angeles Dodgers with pride and dignity. Amen…

” When you think about these two different worlds, one is a game and one is very real. It woke me up real quick. ” So all in all it was a really fun day. The Vets, some still active, some reserved, some out altogether, were really appreciative that the Dodgers did this for ’em. The days of Vets not being revered, like in the day when Gleason came back, are thankfully long long gone.

Read Philippians 1:3 and thank God for the Veterans and what they have done.